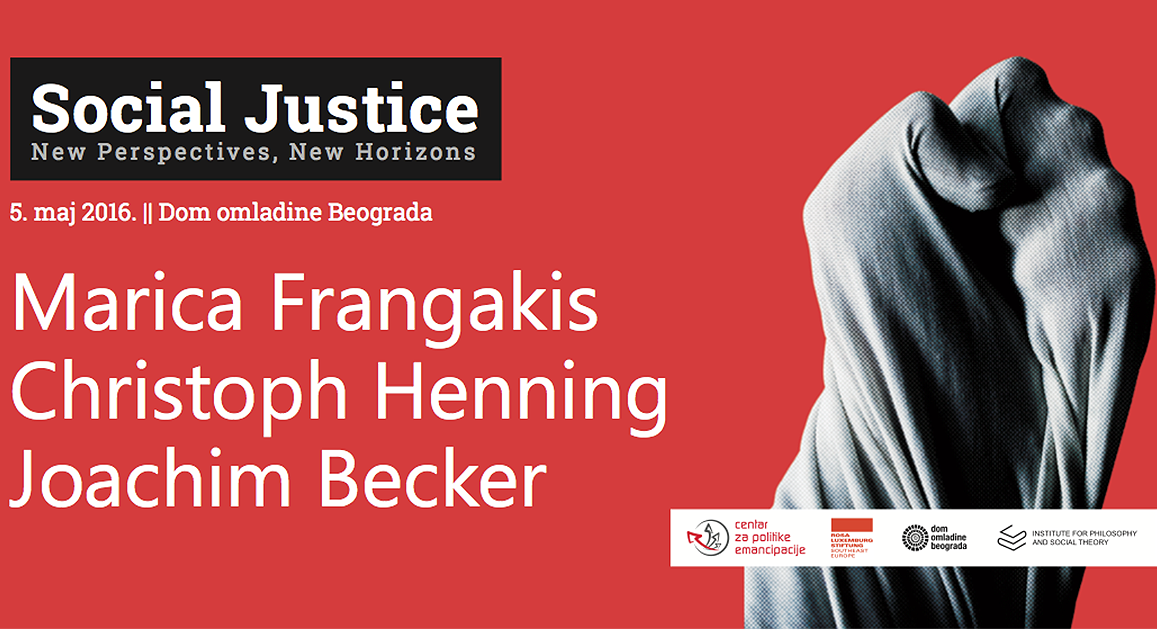 Centre for the Politics of Emancipation invites you to the segment “Social justice: Critical Perspectives” of the international conference “Social Justice: New Perspectives, New Horizons“, organized in cooperation with Rosa Luxemburg Stiftung Southeast Europe, Belgrade Youth Center and Institute for Philosophy and Social Theory. The problem of social justice will be addressed through the issues of efficiency and productivity of the capitalist mode of production, privatization of public property, critic of current economic policy and the possibilities of alternative approaches.

However, in order to fully achieve the consent required for the reproduction of the social system, social contract must include the idea that the owner of labour power will be able to ensure his/her material existence through the sale on the labour market, which in capitalist societies is often not the case, especially in times of crisis of accumulation of capital. This leads us to the contradictory concept of social justice: while on the one hand, it insists on righteousness of market competition, with the ultimate goal to meet the interests of capital for the appropriation of surplus value and maximization of profit, on the other hand it also implies the satisfaction of material conditions necessary for human reproduction.

This is a class struggle centered around the dominant concept of social justice. From the left perspective, it is necessary to challenge the liberal concept in order to achieve the interests of labour owners and broader social strata and to establish a society whose main objective is to satisfy the needs of the people and develop a full human potential.

Therefore, it is necessary to critically reflect on the concept of social justice through the class fragmentation and social polarization expressed in the growing differences in distribution of income, wealth and power. This increasing inequality at the global level is the unavoidable consequence of the dominant processes of neoliberal austerity measures, privatization and the changes in working conditions, designed to increase productivity and surplus value for the capital.

++Marica Frangakis: Social Justice and the neoliberal state – The “shock therapy” of Greece

Abstract: In this presentation, the concept of social justice and its relation to the theory and practice of the neoliberal state are explored. Further, the transformation of the neoliberal state under crisis conditions into an authoritarian one is introduced. Against this analytical background, the current state of social justice across the EU member-states is examined on the basis of the Social Justice Index. The case of Greece is looked into in some detail. More specifically, the “shock therapy” applied since 2010 and its implications for the economy and society are discussed, while special mention is made of the privatization plans currently in place. The presentation concludes with the need for a change in narrative and for deriving alternatives through critical analysis as well as engaging with the social movements.

Biography: Marica Frangakis Ioannou is a British trained economist, who has worked for many years in the banking sector (Agricultural Bank of Greece and National Bank of Greece Group).  She is at present an independent researcher, with a special focus on marcroeconomics and finance, especially pertaining to the European Union.  She has contributed to and co-edited a number of books, as well as published numerous articles on EU macro and financial policy and on the present crisis.

Abstract: A key strategy to deny demands of social justice is the claim that “the cake” will be smaller (or lower society’s productivity), the more equal the distribution of the social product in society. This claim basically comes from neoliberal economics, but to some extend it is also shared by John Rawls and influential philosophical theories of justice. Against this, this paper claims that the notion of “productivity” is not a neutral term. A look at the history of the concept shows that it has been involved in political and economic power struggles from the very beginning. Hence, one can hardly base a “neutral” concept of justice on notions of productivity that are taken from econmics without further reflection. But how, then, can a critical theory of justice look like? Are there more progressive ways to talk about “productivity”?

Biography: Christoph Henning is a Junior Fellow for Philosophy at the Max Weber Kolleg at the University of Erfurt, Germany. His main fields of interest are social and political philosophy, critical theory, and history of ideas. His last books were the Englisch translation Philosophy after Marx (Chicago 2015), as well as (in German) Theorien der Entfremdung zur Einführung (Junius 2015) and Freiheit, Gleichheit, Entfremdung: Die politische Philosophie des Perfektionismus (Campus 2015). He also has two little sons and a wife.

Abstract: The Development Models in Central Eastern and Southeast Europe are highly extraverted. In the Visegrád, financialisation and export industrialisation have become the main pillars of the development models. In the Czech Republic, Hungary and Slovakia, the industrial exports have a very narrow profile and are dominated by the car industry. Most of the export industry is controlled by transnational corporations. Manufacturing industry in the Visegrád countries is based on relatively cheap labour. In most of the Visegrád countries, regional differences are high. Some regions suffer from extremely high unemployment. The development models in the Visegrád countries seem to have reached certain limits. They are discussed in a more critical light than before the global crisis, though the critique is still very incipient.

With the exception of Slovenia, the successor states to Yugoslavia have never recovered from the severe desindustrialisation of the 1990s that resulted from capitalist transformation, the disintegration of Yugoslavia and the wars. The weakness in industrial production has resulted in extremely high deficits on the trade balance. Capital has mostly invested in sectors like tourism or real estate development. The project “Beograd na vodi” has been development in this vein. The growth of the pre-2008 years was mainly based on rapidly increasing household debts (often in foreign currency) which financed increasing consumption in the face of low wages. With the end of high capital inflows, this growth model collapsed. Unemployment is considerably higher than in the Visegrád countries, social conditions are worse.

There is a need of profoundly restructuring the production structures in both sub-regions. In particular, the high import dependence and the enormous regional differences should be addressed. A more inward-looking sector should be built up. In countries like Serbia or Croatia, the rehabilitation of what is left of the “socialised” industrial sector could be an element of a selective re-industrialisation strategy that has to take the ecological constraints into account. Specific measures should be taken to strengthen production structures and micro-regional circuits in the particularly peripheral regions. The international constraints are a very tricky issue to address. Another crucial question is which type of social alliances could be forged for bringing about at least steps towards an alternative production model.

Biography: Joachim Becker is Associate Professor at the Institute for International Economics and Development at the Vienna University of Economics and Business. He has been visiting professor at the Universidad de Buenos Aires and at the Vienna University. He has published widely on issues of development and crises, often with a regional focus on Central Eastern and Southeast Europe.